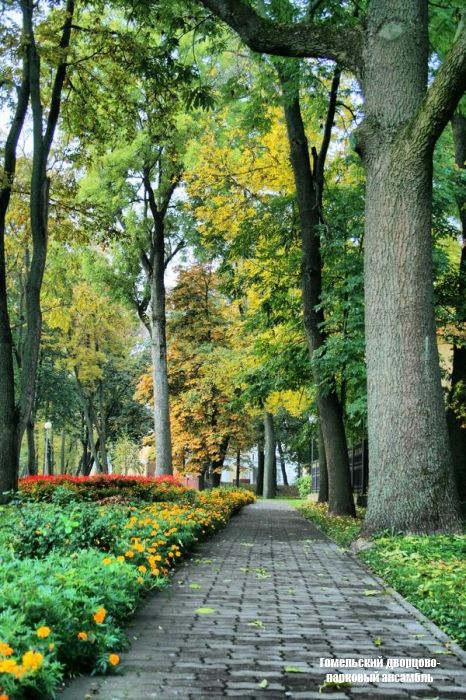 The park of the Gomel Palace & Park Ensemble is one of the most beautiful landscape parks, and it is one of the major attractions and a true gem of the Belarusian soil. It is located on a high right bank of the Sozh River. This river bank is crossed and limited by the former ravine known as the “Kiev Slope” and by the former riverbed of the Gomejuk, now transformed into the Swan Pond.

The Gomel Palace & Park Ensemble was established in late 18th-mid 19th century by the Rumyantsevs and the Paskeviches, famous individuals, statesmen and military commanders of the Russian Empire. The territory and the landscape of the future park started shaping at the beginning of the Palace construction (1777-1785). Undoubtedly, the green zone had existed before, nearby the estate of the Chartoryiskis, and possibly it had been established on the basis of the natural foliage forest. However, the newly constructed architectural buildings also required new solutions for the surrounding landscape. That is why the territory neighboring the Palace was principally redesigned.

However, real park work started in 1845 only at the time of Ivan Fedorovich Paskevich according to the design project of Adam Idzikovski, Polish architect. Paskevich was carrying out the park work very thoroughly. The park was built according to the principles of the landscape style, keeping existing location of all natural elements. Indented and undulating land, closeness of the river, a small water body (the Gomejuk River, the riverbed of which could be transformed into a lake): everything was utilized by the park constructors. They would bring clay and sand to some park spots, they would dig and fertilize the upper soil level.

They started planting the park trees in 1845. Alongside with the young trees there were old trees too in order to grow the park faster. They brought oaks, maples, elms, hornbeams, ash trees from the Korenev Forest Cottage to the Gomel Park in winter of 1848. 300 small and 58 large trees and some greenhouse plants arrived from Warsaw next year. E.F. Rego, famous Russian botanist and horticulturist, who was Junior Scientific Assistant Professor of the Gory-Goretski Agricultural College, once wrote after visiting Gomel in 1851: “The park has fascinating coniferous trees, especially larches and cembra pines. Many exotic plants have been planted throughout the park including ginkgo biloba, English oak comb, red oak. Prince Paskevich has brought an oak from Paris personally. Many exotic trees have been planted in the park: Siberian fir, Manchurian walnut, box elder, weeping mountain ash, Nedzvedski apple tree…”.

Park reconstruction was over by 1850. By that moment the park occupied 25 hectares and consisted of three parts, and it was believed as one of the best examples of garden art.

Today there are over 6,000 trees of over 40 species in the park, including exotic and relict breeds. Abundance and variety of greenery make the Gomel park unique. There a mulberry tree gets along together with birch, cedar, Lombardy poplar, black pine. There are a few 200-year old European larches and a silver maple, towering by the passway bridge on the slopes leading to the Swan Pond. Along the brook and around the ponds oak, hornbeam, maple, ash, Siberian and European larch, chestnut, acacia are united in picturesque groups. The park also possesses rare species: pyramidal oak, pedunculate oak, Weymouth pine, weeping ash, Manchurian walnut, Amur velvet, and a huge Japanese larch.

Creating any park is a long non-stop process followed by constant corrections put into primary targets. Today the Gomel Park lost a few of the tree species, and many of them are old, unfortunately. Due to that it is planned to rehabilitate and refresh the structure of the species and plant new trees such as acetic sumac (rhus typhina), felt or silver linden (tilia tomentosa), Nedzvedski apple (malus), red chestnut (aesculus carnea), rotundifolious mountain ash (sorbus aria).

Currently the territory of the Gomel park is a solid broad-leaved woodland. And only in the Gomel park you can find unique aliens: ginkgo biloda and a red oak. They cannot be found anywhere else in Belarus.

Today the former park of the Paskevich Princes is the monument of garden art of the 19thcentury and a favorite rest location of the inhabitants of Gomel and for the city visitors.